Among my favourite kind of art is the immersive film installation, and there are two great exhibitions on show in London at the moment that show off its power perfectly. It’s time to get immersed, people!

At Victoria Miro there is an exhibition of Doug Aitken’s work, which includes a large-scale mirrored installation that features a number of video screens showing a film starring hipster actress Chloë Sevigny. Black Mirror is a somewhat bleak tale that amplifies many of our anxieties about modern life. Sevigny is shown alone and constantly travelling, tripping across time zones and through airport terminals, and conducting all her relationships over the internet or via mobile phone (an iPhone 4, natch). Face-to-face human interaction has been eradicated for her, and she seems to have even lost track of her own past: everything is about the present, and the need to keep moving, to – as she voices in the film – “check in, check out”, “never stagnate, never stop”, “exchange, connect and move on”.

The production values of Aitken’s installation are very high, and the atmosphere is one of slick, expensive professionalism, all perfectly in keeping with the film’s own projected image of life. On the wall next to the installation is a light-box containing a blown-up image of an iPhone 4 with a shattered back: an oddly hip accessory these days, speaking of a certain casual capitalism, where nothing is precious and everything is ultimately replaceable. Both the lightbox image and the Black Mirror film are sharply of their time, and soon will seem old-fashioned: or at least the technology they display will, even if the medicated vision of society presented in the film remains pertinent.


Over at the Hayward Gallery, things are more cheery, with a survey exhibition of the work of Pipilotti Rist. There are over 30 works here, stretching back to the mid-80s. Central to Rist’s work is the human body, and she encourages her audience to viscerally engage with her work, in fact makes it great fun to do so. Many of the artworks playfully manipulate our sense of scale: one tiny video that is embedded in the floor features the artist peering up at us, while another requests we poke our head through a hole to view the work.

Rist projects videos inside handbags and onto vases, upending our idea of where we expect to see film. She also tackles subjects that are often taboo or cause discomfort – menstruation, female sexuality – and presents them in unexpected and mostly celebratory ways. There is so much to enjoy about this show, but for me the favourite moments came when lounging in Rist’s large video installations. Again, she plays with our conventional notions of what constitutes a screen, projecting video onto strips of material hanging from the ceiling, that other visitors jostle as they go by. The films themselves are visual poetry: a mixture of trippy imagery that washes over you as you lay on the quirky cushions scattered on the floor. It is impossible not to slip into the rhythm of the visuals, and the hypnotic soundtracks accompanying them, and relax. Bliss. 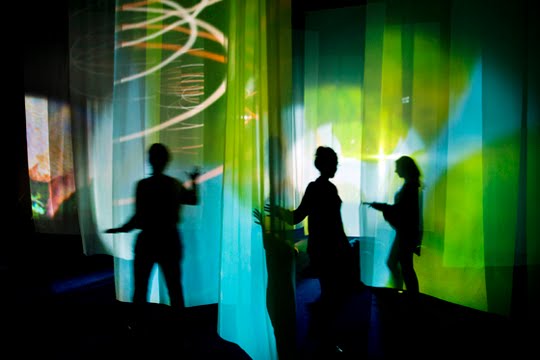 Doug Aitken is on show at Victoria Miro until this Saturday (November 12). More info is at victoria-miro.com. Pipilotti Rist is at the Hayward until January 8: see southbankcentre.co.uk for details.
Posted by SODSOA at 15:51