In ‘Plank Salad’, Helen Marten has reconfigured the space at Chisenhale in London with a seductive installation that uses ephemera from both high and low culture to explore the social codes and messages contained within our physical world.

At first glance it might seem as if Marten has turned the Chisenhale into a high-end modern furniture store. A series of desks line the entrance, propped against a temporary wall that the artist has inserted to divide the gallery’s usually large open space. Through a door in the wall further dividers are discovered, though these screens are elegantly designed in wood, and wouldn’t be out of place in a minimalist home. One wall has a series of equally tasteful chairs hanging from it, while opposite are two large graphic-style portraits of Mozart. 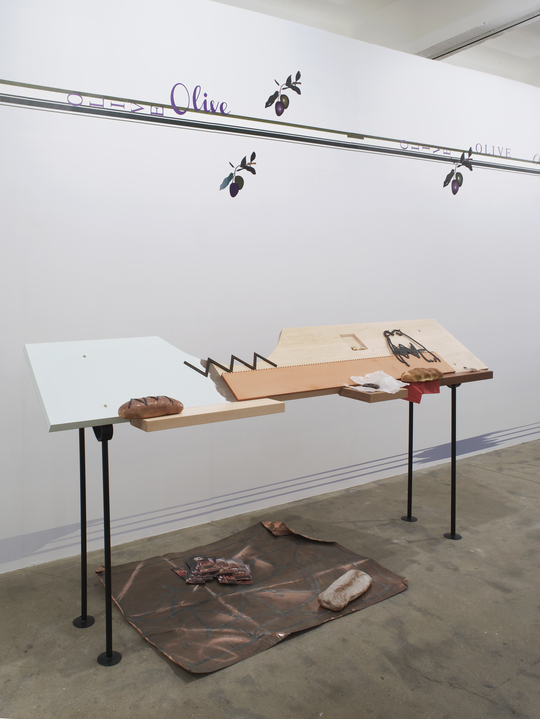 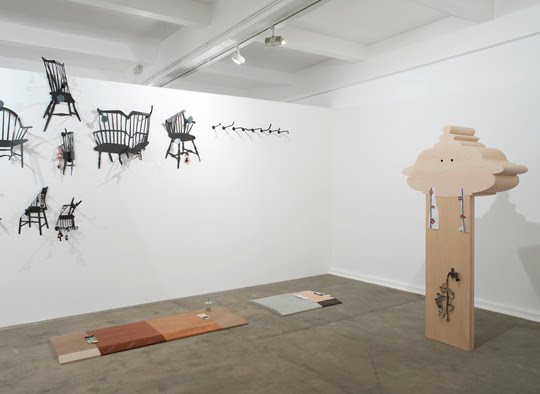 Nothing is quite as it seems, however. The objects Marten features may be familiar but their purpose has been subverted. The everyday use of the chairs has been removed, and instead they are mere chair silhouettes, suggestive of their typical use but entirely impractical. The desks are similarly props, used to host a vast array of other objects, including cans of olives and loaves of bread, which have been carefully placed on and hung from their surfaces. Other items are hung around the space: a child’s monkey toy hangs from one divider, while another finds a string bag full of tubes of toothpaste, among other things, attached to its side; the Mozarts have bottles of alcohol suspended from the base of the portraits.

Unlike other artists that deal in installations of ‘stuff’, nothing here seems casually placed, and instead Marten seems to want us to think about the relationships between all the items here, and what they say about our world. It is a democratic vision: the iced coffee placed on the floor in one piece seems as significant as Mozart. Another piece wittily blurs the high and the low in such a way as to become almost blasphemous, as Gerhard Richter’s famous portrait of his daughter Betty appears reproduced on a pile of cheap pizza flyers. 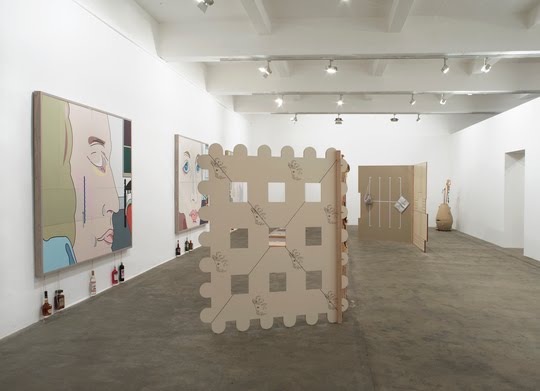 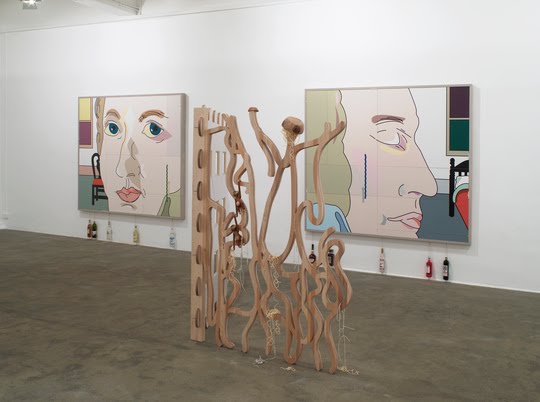 The show glories in surface and form, and in the increasing visual muddle that we live in, as advertising and art alike compete for our attention. Marten is interested in how we interpret these signals, and the new languages that they provoke. As she explains in the lengthy interview accompanying the show, “language is a system that we know very well how to exploit and re-wrap around things. Words are communicating, but at the same time they’re tumbling about themselves in a knotty chaos of pictures and images. Language can bruise, activate or dissolve known outlines of things, so finding the seams of where an object becomes recognisable – be that substance or something more linguistic – you can begin to tug it apart and reformulate anew.”

‘Plank Salad’ playfully embraces this ‘knotty chaos’, combining materials and imagery in unexpected forms and encouraging us to relish in the glossy surface of things. Everything here seems simplified to its most basic form or shape. Even Mozart is reduced to his starkest image – a simple line drawing that speaks of ‘genius’ or ‘maestro’ instead of a real human being – and is seemingly as easily interpreted as a loaf of bread or a tube of toothpaste. The lack of depth and substance contained in Marten’s stripped-back vision of the world is somewhat frightening, though when presented this sexily, is compelling.

'Plank Salad' is on show at Chisenhale until January 27. More info is at chisenhale.org.uk.