Artangel presents A Room for London 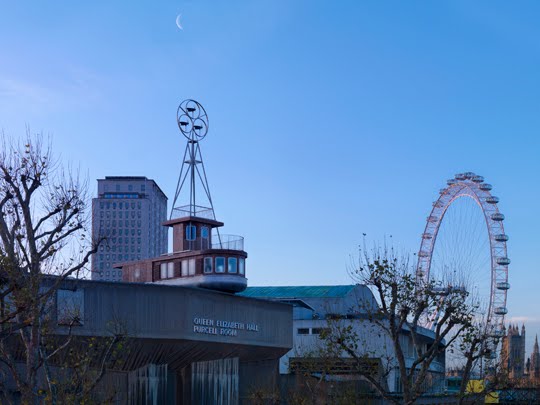 Artangel has built a reputation for exhibiting art in unusual places, but the team have outdone themselves with their latest project, which sees a small ship-cum-flat placed on the roof of the Queen Elizabeth Hall in London’s South Bank.

Created in collaboration with Alain de Botton's Living Architecture, A Room for London was designed by David Kohn Architects and artist Fiona Banner. Their idea was the winning entry in an open competition to create a room on the roof, which attracted entries from over 500 architects and artists. The space is a fully functioning flat, which will be in place throughout 2012, and can be rented by the night. It will also be the venue for a programme of writings, readings and live music webcasts, which will be featured on the project’s website, aroomforlondon.co.uk. 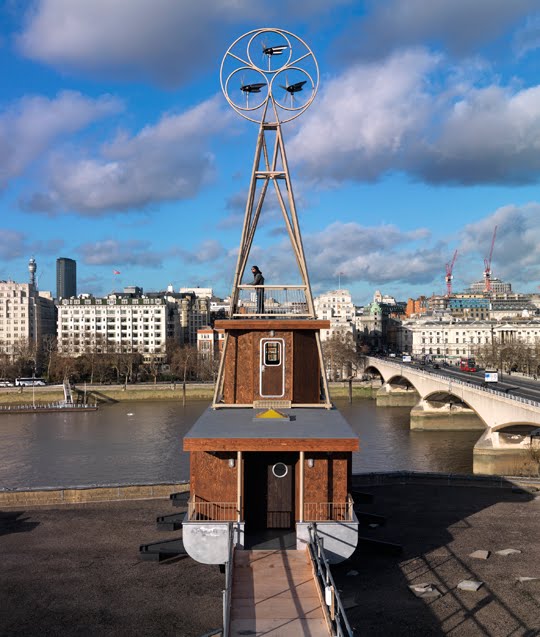 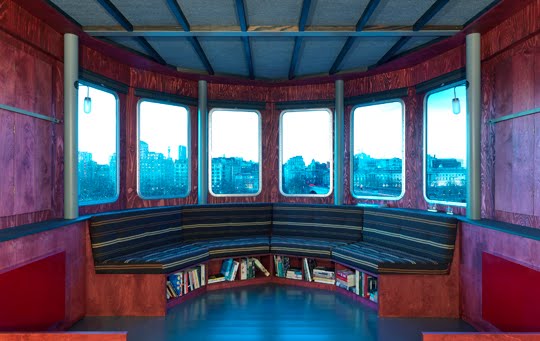 The boat (named Le Roi des Belges) is accessed via an anonymous-looking doorway at the back of the QEH, which only those with a special pass can open. From there it’s a surprisingly lengthy journey in a newly installed lift (this is the first time that the roof area has ever been used) before visitors are released out onto the flat roof to be greeted by stunning views across London.

In the midst of that view is the boat, which looks as if it has been dropped from space. Kohn and Banner’s design is inspired by the riverboat captained by Joseph Conrad whilst in the Congo in 1890, a journey echoed in his momentous tale The Heart of Darkness (which also features the Thames). It is topped by a pyramidal steel mast that makes reference to the spire of Hawksmoor’s Christ Church in Spitalfields. Unlike Conrad’s boat, this vessel will never sail: weighing in at 21 tons, it is 10 tons heavier than Conrad’s and will remain forever a landlubber. 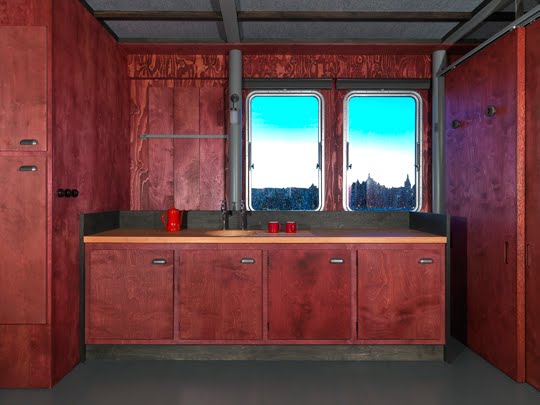 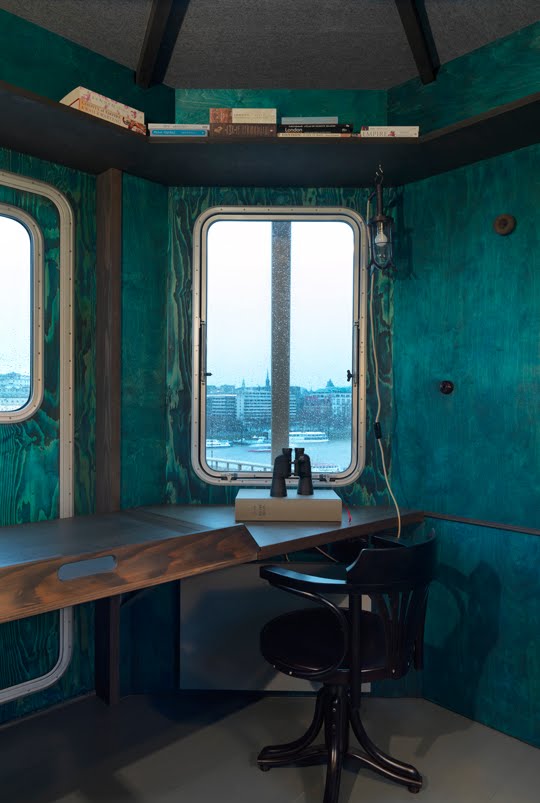 Stunning from the outside, the internal design of the boat is impeccable too, featuring beautiful timber-lined walls stained magenta and turquoise, bespoke furniture and top-spec facilities. There are a few artworks in the space – Banner has created a work based on Heart of Darkness and there is a ‘cabinet of curiosities’ containing racks of images related to the Congo (a design inspired by the Hogarth display case at the Sir John Soane Museum) – but in many ways the emphasis of A Room for London is more on design. For there are clever design tricks throughout: ladders give access to a small library and then onto the top roof of the boat; the beds can be moved to offer a variety of sleeping arrangements; and special window slats are incorporated into the walls to give ventilation in the summer. It is a truly special place: a cosy, unique eyrie positioned in one of London’s finest locations.

Sadly then, being inside the boat is an experience that not many will get to try out. Bookings for the first six months of the year have already been filled and these sold out within 12 minutes. One way in is via the competition Ideas for London, which is offering the chance to win a night per month in the space by coming up with a brilliant new proposal for the city. Otherwise, the final six months of year will be offered up for rental on January 19 at midday. Considering how fast the initial bookings went, you would be advised to act fast to not, erm, miss the boat.


More information on A Room For London is at aroomforlondon.co.uk.
Posted by SODSOA at 12:50