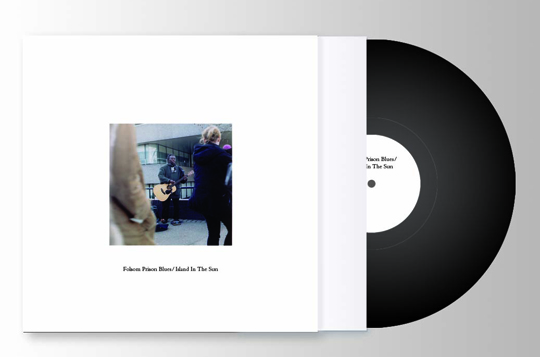 To coincide with his forthcoming Hayward Gallery show, Joy In People, Jeremy Deller is releasing a record, starring Chuck, a singer and musician who often plays along the South Bank in London...

The disc is created in collaboration with The Vinyl Factory, and features two songs: cover versions by Chuck of Johnny Cash's Folsom Prison Blues, and Island in the Sun by Harry Belafonte. The songs were recorded live, direct to disc, at a studio in West London.

On the front of each sleeve (which is designed by Paul Pensom in association with Deller) is an individually printed 13cm square photograph of Chuck performing on the South Bank, taken by Deller. The record will be released on 180-gram heavyweight vinyl.

The record ties into Deller's general interest in music, which has cropped up in previous pieces by the artist, from his 1997 Acid Brass work, where traditional brass bands peformed arrangements of acid house music, to The Uses of Literacy, an exhibition created by fans of the Manic Street Preachers, which brought together paintings and other artistic ephemera inspired by the band's lyrics.

It will be available for pre-order from Monday (Feburary 20). There are two editions: 100 copies, hand-signed by Deller and Chuck, are available exclusively from the Vinyl Factory website (vfeditions.com) for £100 each; and 100 unsigned versions, retailing at £50 each, will be on sale in the Hayward Gallery shop.

Joy In People, a survey of Deller's career to date, opens at the Hayward on February 22. More info is online here.
Posted by SODSOA at 11:16