Surfing with the Attractor: Stephen Willats 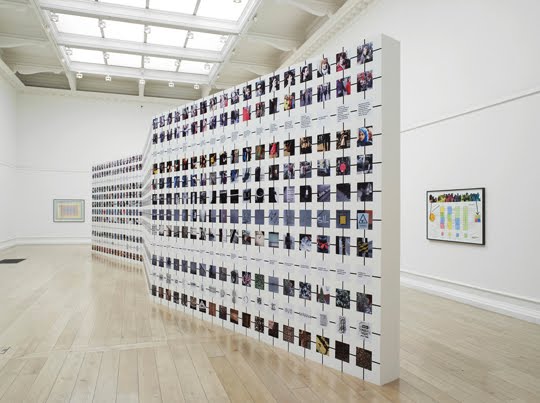 How might the internet look as a physical art installation? It's an intriguing idea, and one that is answered in part by Stephen Willats' exhibition of new work currently on show at the South London Gallery.

'Surfing with the Attractor' is Willats’ second solo exhibition at the SLG – the first, titled 'Changing Everything', took place 14 years ago, and was created in collaboration with members of the local community in Peckham, who were invited to walk through the housing estates next to the gallery, and document using a Super-8 camera the signs, objects and life that they saw in the estates.

Material from ‘Changing Everything’ is presented as part of Willats’ current show, alongside a large, new installation, described by the artist as a ‘data stream’ (shown above), which has been created alongside 14 London-based artists. On the walls around the central installation, Willats has hung diagrams and charts that document the making of the data stream and the ideas contained within. 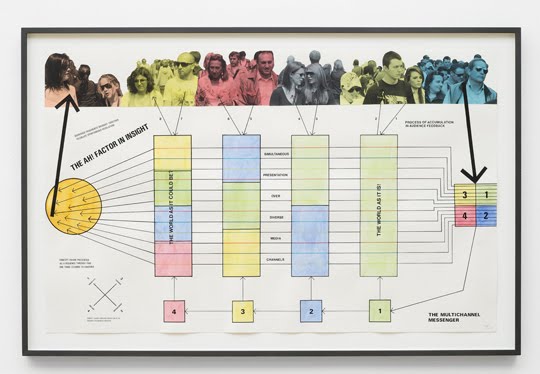 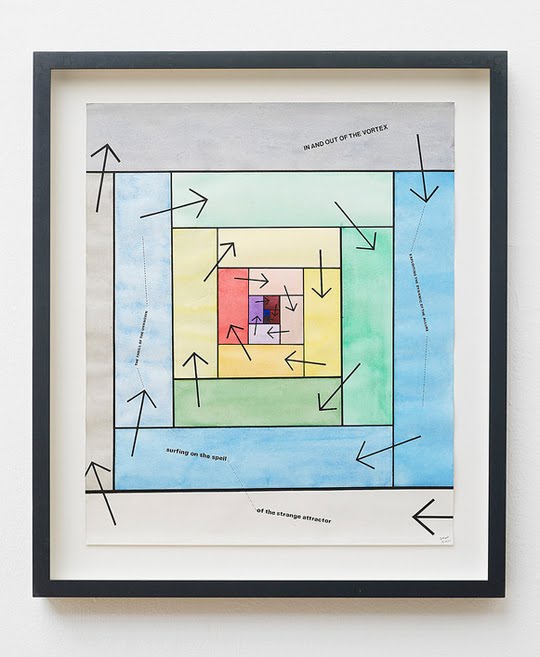 It is the data stream itself that proves the most compelling, however. The piece presents the documentation of two London streets – Regent Street in central London and Rye Lane in Peckham – over two days in March this year. Images taken on the streets, of passers-by and street signs, both official and unofficial, are combined with text describing the sounds heard or events observed. There are arrows to direct people through the streams, though it is easy to abandon this – and this is where connection to the net becomes relevant – and to take your own journey through the piece, seeing where your eye lands. 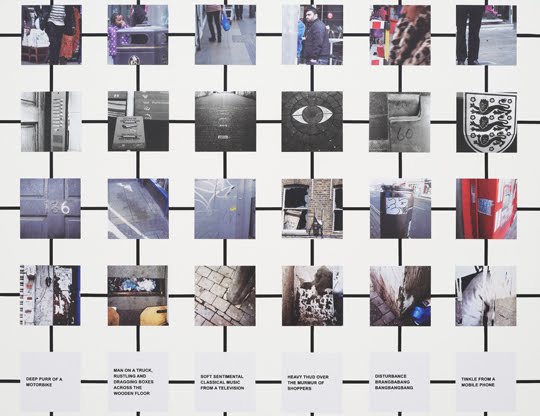 Despite the input from the 14 other artists, the piece presents a uniform aesthetic, with all the images and texts presented within neat squares. Yet there are observable differences in the way the two streets are presented. Some of these are down to actual variations between the areas of London. Willats is presenting two different London worlds – the mainstream, touristy, shopping-orientated area of Regent Street against the localised, more deprived area of Peckham. However there are also subtle differences in the way the streets are articulated, which prove more manipulative.

These variations are most obvious in the words used to describe the areas. Whereas the language used to present Regent Street is largely matter-of-fact, if poetic – “a man walks hurriedly past with a coffee into the T M Lewin shop”, “flappy feet flip flopping on the pavement”, “large volume of traffic. Buses and taxis” – the words used to describe Rye Lane allow a more emotional aspect to creep into the work. A woman is described as “anxious” in one text, while another states “unsettling security – somewhere you don’t want to be”. These are small, but powerful differences, revealing the influence of the person documenting the street on the piece, in a way that doesn’t seem so evident in the straightforward descriptions of Regent Street. 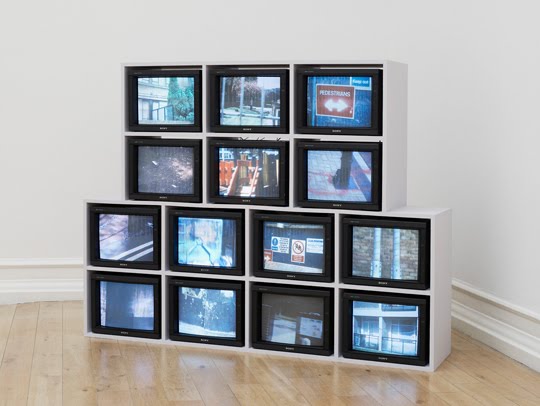 Willats’ work encourages us to think about our surroundings (it was impossible not to create my own mental data stream of the sights I witnessed on leaving the gallery), and also the way we process such information now. He doesn’t overtly flag the influence of the internet on our lives – though use of the words ‘surfing’ and ‘data stream’ seem inevitably to point towards the online experience – yet the work seems to reflect the restless, jerky way that we travel through information online.
Or perhaps it’s the other way around – that the internet just reflects the way we naturally absorb our surroundings? Either way, Willats’ portrait of two London streets exposes in broad sweeps some of the differences and similarities that exist across parts of the city. Yet it also emphasises the importance of always questioning who is behind such documentation, and what influence their own views or feelings may have on its outcome.
Surfing The Attractor is on show at the South London Gallery until July 15. More info at southlondongallery.org.
Posted by SODSOA at 16:12