An art mystery from Ryan Gander 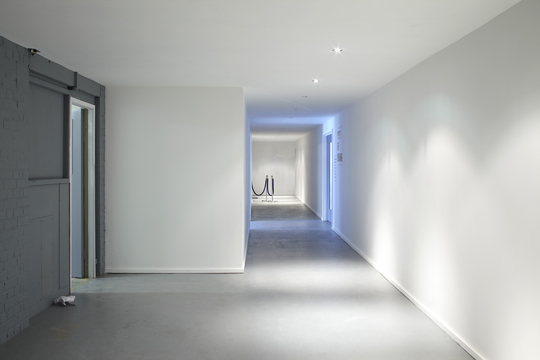 Ryan Gander's art takes work. He has repeatedly claimed that is not for 'lazy people' and that it takes imagination and effort to engage in. This doesn't mean it can't be fun though, and his latest installation, Locked Room Scenario, a project created for Artangel, takes the guise of an art mystery, with the audience invited to play detective…

The scene we are asked to investigate is immediately familiar: it is a group show, by a selection of seven artists revealed to be the 'Blue Conceptualists', who rose to prominence in the 1970s and are now being re-examined here. A timeline on the wall of the space reveals their history, though the work itself is hidden from view, trapped in rooms behind locked doors, with visitors forced to peer through windows to catch a glimpse. What can be seen is often faintly ludicrous: a sculpture of a giant bright-blue fluffy monster lurks round one corner, while elsewhere we're forced to try and read a series of slides in reverse. There is more access behind the scenes: the gallery office reveals piles of letters and other administrative ephemera suggestive of a typical contemporary art space. Clues are littered everywhere – on a scrap of paper left crumpled on the floor, on circled letters on a newspaper crossword, on the graffiti on the outside wall of the warehouse space, from voices overheard in the loo.

The clues begin even before arriving at the space, with visitors sent an enigmatic text message supposedly from one of the artists, and for some, continue after leaving, with certain people urgently handed a page from a book on departure. What it all adds up to remains out of reach, and it's easy to feel like you’re missing something. In fact, watching the film walkthrough below, it turns out I had missed things. This is a recurring theme for me in such installations: I once missed out on a whole section of a Christoph Büchel work after becoming flustered when finding myself alone with a gallery invigilator in a small room wallpapered with explicit porn. In my haste to escape, I failed to notice the hidden ladder that led to series of underground tunnels. Here though, such blunders feel part of the experience, and even if all the clues were discovered, they would only lead to more questions.


For Gander’s work is an elaborate fiction: the Blue Conceptualists are constructed from his imagination. Locked Room Scenario is a series of amusing in-jokes, as well as possibly a more serious critique of the art world’s constant search for both the hot new thing, as well as the hot old thing: the forgotten artists who on rediscovery are suddenly hugely pertinent to today. The Blue Conceptualists story is a convincing one: enough to feel it wouldn’t be surprising if they somehow slipped into an authentic art history in the future, in the way that William Boyd’s art hoax of the 1990s, Nat Tate, has received some legitimacy lately with Boyd-as-Tate’s drawings being sold at auction. I get the feeling that Gander, chuckling behind the scenes, would love that.

Locked Room Scenario was on show at Londonewcastle Depot in London from August 30-October 23. More info is at artangel.org.uk.
Posted by SODSOA at 10:03